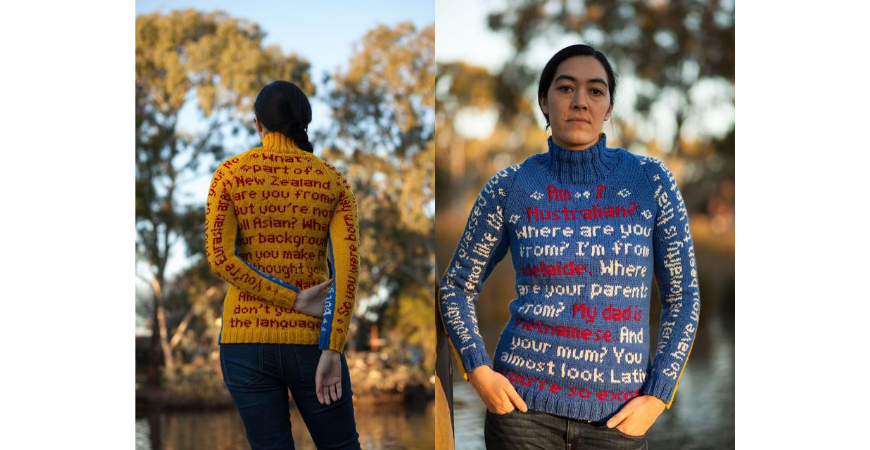 This year’s winner of the SALA Don Dunstan Foundation Award is inspiring textile artist, Makeda Duong, who says winning the award came as a shock.

‘I was a little bit surprised. I felt like the other two finalists were strong contenders as well,’ Duong said.

The winning piece, Duong’s Mixed Race Sweater, is a layered, intimate piece displaying and examining the questions made to her about her identity and her musings on the complexities of being a mixed race, Vietnamese-Australian woman.

‘It’s partly about how I’m perceived as a mixed race, half Asian person, but there’s also a lot of stuff going on behind it to do with my father’s past coming from Vietnam, a country that suffered a lot of invasion, war and trauma,’ said Duong.

The sweater, which is split evenly displaying the colours of the Australian flag on the front and the South Vietnamese flag on the back, is a manifestation of her own heritage and the curiosity it inspires in other people.

As part of her exhibition Mixed Race Female, the sweater asks its audience to reflect upon themselves and the powerful social positions in which questions like ‘Where are you from’ and ‘Am I Australian’ come from.

Each of these questions, which make assumptions about identity based on name or appearance, have been asked to Makeda, an experience known to many other people of colour in Australia.

Additionally, the sweater’s colours comment on the duality in views on communism, comparing the difference between her father’s experience in Vietnam, which led to his migration to Australia, to the ideals of Western youth.

‘I was thinking that a lot of young Western people have this really positive view of communist ideals now, they see it as a positive alternative to capitalism. Whereas, people like my dad, who came from Vietnam, have had oppressive communist rule and see it as a negative thing. This intrigued me and I might be thinking about that in future works,’ said Duong.

Winning the DDF SALA Festival Award hasn’t been the only response Makeda has had for her work. The exhibition has been featured in a number of local publications, further demonstrating the profound impact it’s had on the public.

‘I think it’s made me realise these kinds of works on these topics has really resonated with a lot of people, probably more than I thought it would,’

‘A lot of things that aggravate me tend to make me want to make artwork as a reaction to it.’ Duong said.

The initial inspirations for the sweater began with Duong’s first piece from 2015, the Cursed Boyfriend Sweater, a manifestation of the unhealthy things couples say to each other knitted into a wearable sweater.

Duong plans to save the $1000 prize money to continue creating artwork on topics of mental health, migration, race, and gender.

‘I think it’s emboldened me to make work if I feel I have something to say about it, not feel like I can’t or that it’s a topic that I’m going to be attacked or perceived negatively for,’ said Duong.

With a specialisation in textiles, Duong says she won’t be moving away from the medium any time soon. Instead, she’s considered creating more sculptural works like those currently featured in her exhibition.

Although having a break after this exhibition, Duong will continue to contemplate conceptual avenues, further focusing on ideas of communism and the funding cuts within the arts sector due to the COVID-19 pandemic.