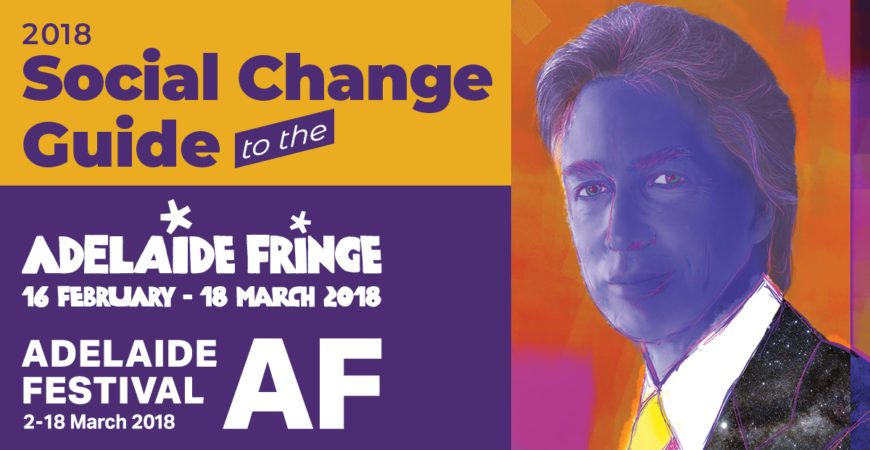 Suicide, racism, domestic violence, and cyber-bullying are just some of the social issues being tackled by performers at this year’s Adelaide Fringe and Adelaide Festival and there’s an easy way to find out which ones.

Don Dunstan Foundation today launched its Social Change Guide to guide this year’s festival-goers on the performances that address the often taboo issues that confront us daily.

The guide references for the first time a line-up of 95 Fringe and Festival shows and events that explore many current social issues including homelessness, suicide, domestic violence, racism, addiction, mental illness, refugee issues, sexuality and cyber-bullying.

“The Arts bring us together to create and celebrate diversity, which is pretty evident when you flick through our Social Change Guide,” he says.

Among the shows featured in the 49-page guide are 41 Seconds which tackles suicide impact, Trollbridge that explores memes, trolls, flamewars and the dark corners of the interwebs and Spinifex Gum which features The Cat Empire’s Felix Riebl and Aboriginal and Torres Strait Islander singers’ shared passion to ignite change.

Adelaide Fringe Director and CEO Heather Croall says the shows in this tailored guide are out to get people talking about the subjects often not openly discussed.

“Many of the performers are actually showcasing their personal stories in a push to make positive changes within our community,” Ms Croall says.

Adelaide Festival’s co-Artistic Directors Neil Armfield AO and Rachel Healy said “the Adelaide Festival is home to the greatest artists of our generation who come from all corners of the globe to share their stories with local, Australian and international audiences. The work of many of the 2018 Festival artists – Toneelgroep, Felix Riebl, and Hotel Modern for example – are inspired by the social issues of our time and their creative genius is fused with a moral energy that encourages audiences to rethink our world’s most pressing social and political challenges. And like all great art, the works thrill and entertain as memorably as the power of their message”

Mr Pearson says art, at its best, can be a powerful way to inspire action for a fairer world, and he hopes the Guide helps people to become more informed on the issues facing our society and increases support for social change.

He also encourages readers to get involved with the social change organisations listed in the guide, and organisations like Don Dunstan Foundation, who are backing the movement.

“Our overall aim is to help improve the quality of life of everyone in our community,” he says.